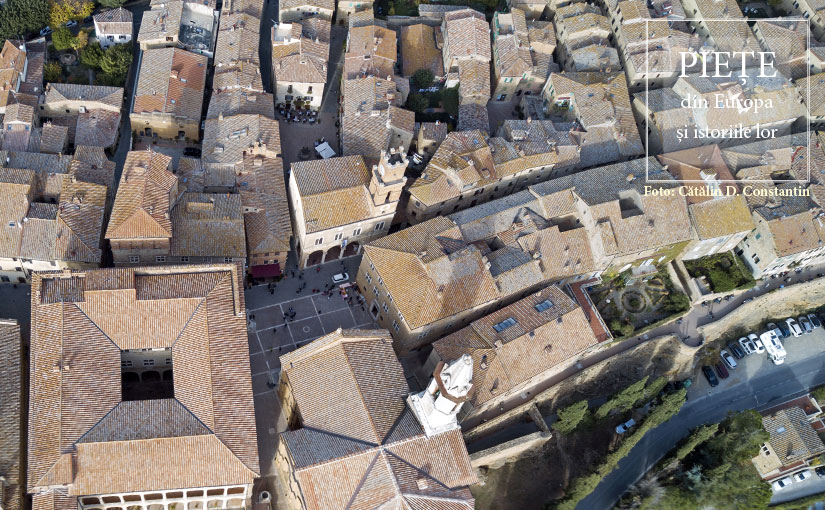 Perched upon a hilltop in Tuscany, Pienza was originally called Corsignano. Pope Pius II loved his hometown greatly and wished to transform it into a concrete illustration of his theories about the “ideal city.” For this purpose he hired the architect Bernardo Rossellino and was himself directly involved in the city’s planning. Influenced by Alberti’s writings, Pius wished to build a uniform and self-sufficient city around a central square. Yet when he died in 1462, the urban sketch of the city that had taken his name was stopped, with only 40 completed buildings. At the heart of this “ideal city,” Bernardo Rossellino had managed to install a trapezoidal square, representing one of the first attempts of urban renewal in the postclassical period.

The area is not large, yet the illusion of space is created through its shape and the design of the pavement. The overall effect is that of a stage set flanked by important buildings. The Palazzo Vescovile lies on the eastern side of the square. On the opposite side stands the Papal Palace. The City Hall lies to the north, with a Florentine-style tower chosen by Rossellino. Two other buildings complete the northern side next to the City Hall. The square is dominated by the façade of a Cathedral, built along the smaller side of the trapezoid, so as not to end up overwhelming the square, for the Pope wished to build a city of human, rather than monumental, dimensions. Everything was carefully calculated, with the construction of the church even taking the movements of the sun into consideration. Inspired by Austrian Cathedrals that were bathed in natural light, the Pope asked that this church not respect the traditional east-west alignment, but be set in such a way that the sun would pour in from the southern windows. The church is aligned with the top of Mount Amiata, an extinct volcano. Its peak is visible from the southern windows of the church, though it is not visible from the square. This leads to an interesting reversal of perception: the interior of the church feels like a wide space that opens out to the landscape, while the square allows little access to its surroundings, and instead feels like an interior space. The two narrow open areas inside the square, on either side of the Cathedral, are some of the earliest Renaissance examples of visual access to rural landscapes from within a town. As such, it diverges from traditional medieval squares. In order to see the landscape, one must arrive at the very end of the square.

Within the square, various details from one building’s façade reappear on another façade; the rectangular shape of these façades recreates the shapes of the windows to scale. The windows at the upper level of the Papal Palace are Rossellino’s inventions, a combination of the Roman cross and the Tuscan rose window. The cross reappears as a detail on the windows of the Palazzo Vescovile, and the rose window reappears on the City Hall’s windows. Archways and circular details, grouped in threes, repeatedly appear on the façade of each building, The travertine grid and the red brick pavement mirror the series of compartments on the façade of the church, and are aligned with the pillars, doors, and corners of all of the buildings found along the square. At the centre of the square is a travertine circle, and the distance between the circle and the door of the church is equal to the distance between the base of the church and the occhio, a typical round window on the façade of the church. This is not the only “coincidence,” for the square respects a geometry based on the numbers 3, 5, and 9.  Moreover, in the early 2000s it was found that the shadow of the Cathedral aligns perfectly with the grid of the pavement at particular moments in time—specifically, 11 days after the solar equinox. It was known as early as the 15thcentury that there was an 11-day difference between the civil calendar and the astronomical one. The calendar reform was highly controversial within the Catholic Church, since Easter is calculated according to the equinox. Pieper, who observed the alignment of the church’s shadow with the grid, believed that the square was initially intended to demonstrate this on the day of the equinox. Thus, the construction had begun, but the project was adjusted so that the alignment would take place on the exact day of the equinox. When the modification was decided, construction on the square’s buildings was already underway. Redrawing the pavement grid would have led to discrepancies in the buildings’ details, so a solution was found by raising the roof of the Cathedral. This has been confirmed by evidence that the Albertian proportions on the church pediment have not been respected. It is still a mystery why details of this reconstruction, as well as the story of the alignment of the Cathedral’s shadow with the drawings on the pavement, make no appearance in the Pope’s extremely detailed diary.